Arabella Mansfield (1846-1911) was the first woman admitted to the practice of law in the United States. She campaigned for equal educational opportunities for women as well as voting rights. 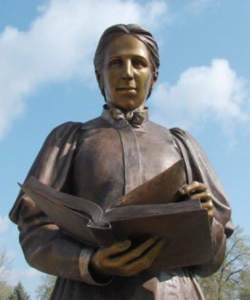 was the first woman admitted to the practice of law in the United States. She campaigned for equal educational opportunities for women as well as voting rights. Despite Mansfield’s admission to the bar, she spent her professional life teaching.

In 2016 Arabella’s last name was used to create the so-called Mansfield Rule. The goal of the Mansfield Rule is to boost the representation of diverse lawyers in law firm and in-house legal leadership by broadening the pool of candidates considered for these opportunities. Mansfield Rule was one of the winning ideas to promote D&I and emerged from the 2016 Women in Law Hackathon hosted by Diversity Lab in collaboration with Bloomberg Law and Stanford Law School. The Diversity Lab is a great American initiative that promotes D&I in the legal sector and is very active in making a change in this regard.

“Boosting the representation of diverse lawyers within legal leadership roles”

The Mansfield Rule for Law Firms measures whether law firms have affirmatively considered women and attorneys of color, LGBTQ+ and lawyers with disabilities — at least 30 percent of the candidate pool — for leadership and governance roles, equity partner promotions, formal client pitch opportunities, and senior lateral positions.

The Mansfield Rule for Legal Departments asks legal departments to consider at least 50 percent women, minority lawyers, LGBTQ+ lawyers, and lawyers with disabilities for key leadership roles and outside counsel representation, which is an increase from the 30 percent requirement for law firms. This change was based on the knowledge that legal departments are often more diverse than law firms, however, they still lack true inclusion at the top ranks, with women making up only 31 percent of General Counsel in the US and minority lawyers making up fewer than 20 percent of Fortune 500 General Counsel in 2018.”

The Mansfield Rule was inspired by the NFL’s Rooney Rule. The Rooney Rule requires every NFL team to interview at least one minority candidate for head coach vacancies. In the years following its implementation, the number of minorities hired to fill head-coach roles doubled. New research, which controlled for other factors that may have contributed to this positive outcome, shows that a diverse candidate is about 20 percent more likely to fill an NFL head coaching vacancy during the Rooney era than before the rule was introduced.

Diversity Lab is an incubator for innovative ideas and solutions that boost diversity and inclusion in law. Experimental ideas are created through Hackathons and piloted in collaboration with top law firms and legal departments across the US.  Diversity Lab leverages data, behavioral science, design thinking, and technology to further develop and test the ideas, measure the results, and share the lessons learned. Click here to learn more about some of their pilot initiatives.